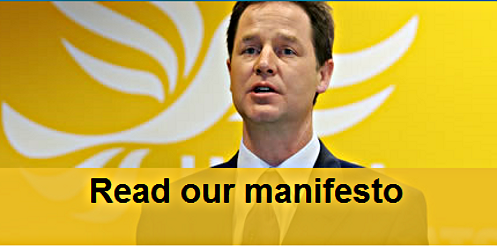 Think Defence have provided an excellent review of the Lib-Dems commitment to renewing the military covenant, this article however will look at their Foreign Policy vision in general, and what they will ask of Britain’s Armed Forces in particular, as stated in their “your world” portion of the manifesto.

Where does one start, well, it might as well be their opening statement:

The world has changed enormously since the end of the Cold War. New threats are emerging and yet Britain’s armed forces remain largely equipped to fight the old ones.

So, they want to reconfigure the Armed Forces, but to what? We must dig deeper. On europe we begin to see the security priorities more clearly:

Make the EU use its collective weight effectively in other areas of foreign policy. Britain can have a far stronger voice on relations with Russia, China, Iran and the Middle East peace process when it joins with the rest of Europe.

Which taken in conjunction with the following:

The Iraq War, and allegations over British complicity in torture and in secret ‘rendition’ flights of terrorist suspects, highlight the dangers of a subservient relationship with the United States that neglects Britain’s core values and interests.

Would seem to indicate that the Lib-Dems are willing to abandon Britain’s unparalleled security arrangements with the worlds most powerful country, a country with whom we have a long and shared history, in return for some soggy security arrangement with EU nations. Quite why this is necessary when the UK is already a key part of the most effective collective security pact known to mankind is beyond the understanding of this blog. We are already deeply linked into American and European security arrangements, this is a retrograde step.

Rule out the like-for-like replacement of the Trident nuclear weapons system. At a cost of £100 billion over a lifetime it is unaffordable, and Britain’s security would be better served by alternatives.

A statement which Nick Clegg recently elaborated upon by stating that they did support “cheaper and better” alternative to Trident, but as the BBC and Critical Reaction argue so cogently:

British governments have studied three times whether there are cheaper ways than Trident (or its predecessor) of achieving the same aims, but each study concluded that this type of system provided the most credible and reliable nuclear weapon. So yes – there are alternatives to Trident. But they are not necessarily cheaper, nor able to do what the current system does. So if the UK decides it wants to remain a nuclear power, most defence experts believe Trident remains the only really credible option.

An alternative nuclear system would require many more up-front costs and would hardly save money. It would almost certainly cost more, perhaps a great deal more. Trident offers great strategic advantages. It is out of sight and invulnerable. In many ways it is a remarkable bargain. This is because its procurement is the result of a very special transatlantic arrangement with which the Americans are willing to go along but which it might well be awkward to renegotiate.

If you are going to have a nuclear deterrent is has to be strategic, which means it has to represent a credible threat, and it must be able to promise a second-strike, otherwise one might as well not bother in the first place.

And here we enter the realm of fantasy:

But Britain’s reputation has been damaged by unscrupulous arms deals with dictators, allegations of involvement in torture, and of course the disastrous and illegal invasion of Iraq.

The Lib-Dems appear to have no truck with the concept of Westphalian Sovereignty, where non-compliance against UNSC resolution 686 (to inform the UN on all chemical and biological weapons), and resolution 687 (to destroy all chemical and biological weapons and ballistic missiles), which were instigated in response to the invasion of Kuwait and the scud attacks on Israel (a breach of the right to self determination, and the right to non-intervention, under the Westphalian system), led to an invasion to enforce compliance (of the ceasefire agreement). There were many things wrong with the 2003 Iraq war, both in the lead up and in the post invasion phase, but it was not an illegal war.

This perhaps should not come as a surprise from a party that is so keen on ever-deeper-union within the EU, who as Joschka Fischer put so aptly:

“The core of the concept of Europe after 1945 was and still is a rejection of the European balance-of-power principle and the hegemonic ambitions of individual states that had emerged following the Peace of Westphalia in 1648, a rejection which took the form of closer meshing of vital interests and the transfer of nation-state sovereign rights to supranational European institutions.”

The EU is a post-sovereign construct based around consensus of deliberately disparate parties, and that bodes ill for the notion of an independent Britain free to pursue what it perceives as its national interest. what we have here is a party that is closely aligned with the ideology of transnational progressivism and its key tenets:

The idea that a Britain fully embedded in EU foreign policy would embark on contentious Foreign Policy under this regime is alien, even if that policy was the unilateral use of military force to remove foreign occupation from British territory.

The combination of an abundance of idealism and a utter lack of pragmatism is clear evidence that the Lib-Dems have not wielded the levers of power in some time.

Here we run into a brick wall as this blog has run out Foreign Policy manifesto to read, there simply is no more, and thus we must speculate.

This blog has used the prism of the RUSI doctrines to disaggregate and study the ideas of other parties involved in the Future Defence Review debate, why not apply the same ideas here? Why not indeed.

When considered against the backdrop of a lack of a serious policy on the strategic deterrent, this blog considers the Lib-Dems uninterested in maintaining Britain as Great Power, therefore Strategic Raiding and Global Guardian are ruled out from the offset.

That leaves the following:

The Contributory Doctrine – i.e. we maintain a reduced military that whilst broadly capable, and able to contribute usefully to international operations, would lose any possibility for national autonomy for intervention operations, because we would be dependent on other nations for the capabilities it had surrendered. We would be in a similar position to Germany or Poland; able to provide brigade level combat units or specialist functions to multinational operations.

The Gendarmerie Doctrine – i.e. we lose all ambition to high intensity warfare outside of our own national borders, and capable only of providing light weight peace-keeping forces for multinational operations. We would be in a similar position to Belgium or Denmark.

The Little Britain Doctrine – We abandon all but home defence, we would remain in a similar position to Ireland.

Based on the enthusiasm for EU integration this blog believes that the Lib-Dems would opt for the Contributory doctrine lite, based on the principle that strategic power projection is no longer desirable, and maintaining sovereign force will be unnecessary under EU defence.

The logical conclusion that must be drawn from the end of strategic power projection in addition to the end of a strategic deterrent, is that Britain will no longer wishes to keep its permanent seat on the UN Security Council, as it will no longer have the means with which to justify that seat. The obvious  result would be that the EU would adopt our Security Council seat, and probably merge with the French seat at whatever point the UNSC undergoes serious reform.

Britain will once more exist in a world where it must accept that others will shape the world in their image rather than the converse, and it must trust that the EU has the collective will to provide for that lack of sovereign security.

21 responses to “Britain’s future strategic direction #7 – Whither will the Lib-Dems lead us?”