In the previous article this blog discussed the value of PC gaming in bringing Linux to the mainstream home user, and in particular the importance of stable drivers as an enabler of this revolution, but what about the other technologies that will underpin a truly first-class linux user experience? In many cases the mainstream user won’t be aware of the technologies that provide this user experience, and even if they did they really wouldn’t care, because the limit of their interest is that the computer and it software environment work seamlessly to meet their user needs. This does mean however that those technologies, and their progress towards maturity, are not of interest to those with a nerdier bent. 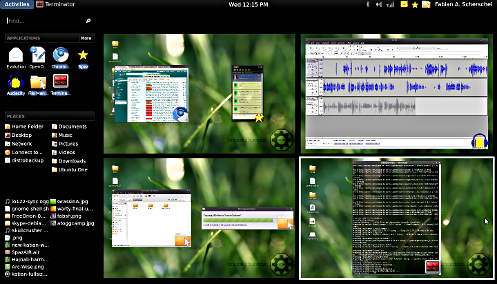 This article will pick up a few of the technologies that this blog deems key to bringing linux to the mainstream user.

The first and most frequent point of contact between the user and their computer is the Desktop Environment (DE), the aggregation of icons, windows, toolbars, folders, wallpapers, shortcuts and desktop widgets, themed and styled in a given way to create a distinctive graphical user interface (GUI). The three DE’s which will define the year of linux include KDE and Gnome as the two dominant desktop computing paradigms, and MeeGo as the emergent competitor in the mobile computing paradigm.

KDE4 is the culmination fourteen month re-factoring of the previous KDE codebase, and included the several new technologies known as the Pillars of KDE4: Phonon is the multimedia API provided by Qt and is the standard abstraction for handling multimedia streams within the KDE 4 software collection. Phonon was originally created to allow KDE 4 to be independent of any single multimedia framework such as GStreamer or xine and to provide a stable API for KDE 4’s lifetime. Solid is a new device integration framework for KDE 4, the current release of the K Desktop Environment. It functions on similar principles to KDE’s multimedia pillar Phonon; rather than managing hardware on its own, instead it makes existing solutions accessible through a single API. Decibel is a new communication framework for KDE4, the current major release of the KDE desktop environment. Decibel aims to integrate all communication protocols into the desktop. As of now users have all their contacts in different applications: AOL, MSN, E-mail, Skype, etc. Akonadi is a storage service for personal information management (PIM) data and meta data and will provide unique desktop wide object identification and retrieval. Akonadi will function as an extensible data storage for all PIM applications. Due to the use of so many new technologies KDE4 has had a difficult birth, first released in January 2008 as v4.0 it was little more than a development release, with v4.1 six months later which could at best be considered a release candidate, and it was not until v4.3 in Summer 2009 that KDE was considered both feature-rich and stable enough to be considered better than the 3.x series that preceded it. Version 4.5 to be released this summer looks like it will finally capitalise on all the new technologies released, and allowed sufficient time for the broader ecosystem of KDE applications to make full use if these technologies too.

Gnome is also undergoing an extensive reinvention at this current time, although the process is both less advanced and more more evolutionary in nature than that of KDE. Key to the new Gnome 3.0 which is due for its first release in September 2010 is the new Gnome Shell user interface comprised of a new window manager and new compositing engine, in addition to using the re-factored GTK+ 3 toolkit upon which all this will be built. With due consideration for the difficult birth endured by KDE4, and mindful of the less revolutionary nature of Gnome 3.0 this blog expects the first polished user-ready release to see the light of day in April 2011, and the first version that will truly shine six months after that in September 2011. It would be no real surprise if the initial release was delayed until April 2010.

MeeGo is a linux based mobile operating system targeted at smartphones, mobile internet devices, and small mobile computers such as tablets and netbooks, with a customised desktop environment built for each application, but like KDE built using the Qt toolkit. Given that it harnesses the technical competence and market dominance of both Nokia and Intel it stands an excellent chance of competing alongside Android and IphoneOS in the smartphone world. Whilst MeeGo is a linux distribution rather than a DE, its success in the mobile world is so dependent on its touch interface and application environment, both of which use the same QT technologies that its GUI relies upon, that I consider it more important for its DE than as the broader package of a distribution. The first release of Meego was achieved earlier this month, though only with a DE suitable for larger applications like netbooks and tablets, the v1.1 release scheduled for September 2010 will however have a greater impact as it paves the way for a new generation of smartphones and mobile internet devices in 2011.

Other technologies of note include:

1. Btrfs, a new filesystem under development that is designed (among other goals) to be able to leverage the capabilities of solid state drives which are now entering the consumer market for computer hardware. Its first use is likely to be on MeeGo driven nokia smartphones as well as the Ubuntu 10:10, but its adoption will spread rapidly in 2011 as its development matures.

2. Multi Pointer X which along with X Input 2 will allow truly multi-touch friendly GUI’s capable of working with many unmodified X windows applications. This much delayed feature will hopefully come of age now that there are a myriad of touch-screen devices and computers demanding the attention of consumers.

3. Packagekit is a front end for various package management systems being adopted by many linux distributions as it provides a consistent and reliable application installation/management/removal experience regardless of the desktop environment used.

4. Alsa whose goal in addition to the automatic configuration of sound-card hardware, is the graceful handling of multiple sound devices in a system, a goal which can be considered complete when all videocards with HDMI can seamlessly transfer 8 channel audio along with the video.

Games and technologies are certainly not the totality of what is needed for linux to go mainstream, but they certainly go a long way to reassuring joe-sixpack that linux is a viable alternative to the polished and vibrant user experiences offered by Microsoft and Apple.

In support of my consideration of Meego as GUI/DE it now transpires that Novel will offer a opensuse/MeeGo distribution targeted at netbooks.