Given William Hague’s recent foreign policy speech it would appear that he intends for Britain to keep a premier role in international affairs, we currently have around 35,000 members of the Armed Forces deployed, and it is unlikely given the above that requirement for this commitment will decrease dramatically. Of those 35,000 personnel from all three branches of the Armed Forces ten thousand are engaged in Afghanistan, and a further five thousand are garrisoned in British overseas territories, this leaves approximately 20,000 scattered over sixty plus countries on non-operational deployments such as Germany, as well as numerous training, goodwill and peacekeeping operations in the Americas, Africa, and Asia. The total size of the enlisted forces numbers not more than 175,000, and given that the Defence cuts of 15% are anticipated at a time when units costs are growing at 1.7%/annum RUSI have stated that we should expect personnel numbers to fall in the order or 30,000 after the coming Defence Review. Clearly, having 35,000 members of the Armed Forces on operations and deployed will be unsustainable. 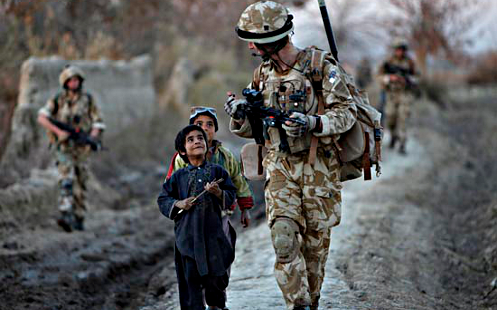 Is it time to consider creating a peace-keeping Corps to work alongside a newly refocused war-fighting Force?

More pertinently; is it time to create a space in British foreign policy for those who would defend themselves at need, in addition to those who will fight at will?

I give you the following quote from the Coalition Agreement, the blue-print for government policy in this parliament:

If we are to take the Defence Secretary at his word that there is to be no strategic retrenchment, and Britain is to remain capable of sovereign military action, then the conclusion is that the Defence Review will focus on either of the two RUSI Great Power doctrines; Strategic Raiding or Global Guardian. If we read the tea-leaves of Fox’s many statements on his vision for Britain’s Armed Forces then it looks increasingly likely that Strategic Raiding is the direction he is leaning in. If we further accept the RUSI warnings on attempting to mix the two doctrines, and Fox’s own statement on the need to remove legacy capabilities and the resulting perception of “winners and losers”, then we arrive at the conclusion that the Army in particular is going to face a reduction from 98 front-line ground formations down to a figure closer to 80.

Here lies the question; how does Britain manage to retain the ability for sovereign and strategic power projection, in addition to meeting its commitments to international peace-keeping, as well as the various training and good-will operations that the Armed Forces currently undertake?

Perhaps the answer is to create a peace-keeping paramilitary focused on security, engineering, medical provision, and training of indigenous security structures, in short; a Stabilisation Force.

According to the RUSI FDR7 if we can expect to lose sixteen front-line ground formation, and presumably an even larger number of combat support formations, with the cuts focussed particularly on the Armoured Forces in Germany, could we not then re-role some of the remainder to create four deployable peacekeeping brigades designed for a 6 month/24 month roulement of the following:

Why on earth should the army be happy to accept this proposal, after all the Royal Navy has been endlessly fighting off attempts to create a Hi-Lo force of escorts because of the perception that the Treasury would treat them like high-intensity combat forces even if they were not, and would not the same happen to the army?

Not if it was funded by DfiD, and not if those core military skills listed above allowed the preservation of training functions at a parity with today’s forces.

The DfiD has a budget for 2010/11 of £7.8 billion, guaranteed to rise in line with economic growth as part of the commitment to 0.7% of GNI, so could this not support dedicated peacekeeping and reconstruction operations? More specifically; if we are separately giving hundreds of millions to many different nations some of whom entertain space programs, aid which is often squandered to the ire or the electorate on NGO’s unable to leave their secure compounds and otherwise lost to corrupt and inefficient governments, could we not better use that money to provision, deploy and support a British paramilitary stabilisation force?

Additionally, this posited peace-keeping force, tasked with stabilisation missions in support of British humanitarian goals, would be composed of formations requiring infantry training, engineering, medical and logistic skills, all of which would be provided by elements of the Armed Forces that are tasked to provide these training functions anyway. If the future of the British Armed Forces is destined to be lean and specialised, then we have an absolute requirement for a regenerative capability to rebuild forces quickly for the kind of state-on-state warfare that the Defence Secretary has said must ranked high as a potential threat which must be met. Obviously the Territorial Army are part of the answer to maintaining a regenerative capability, but in these austere times surely this would be a positive addition to training functions that would otherwise wither from lack of immediate need.

In a world characterised by inter-state warfare and the need to intervene in failed-states, where the hearts and minds of the local population must be won by providing stabilisation forces around which a benevolent civic society can be rebuilt, is there not a purpose for a dedicated peace-keeping force, and is this not doubly beneficial if it helps to preserve our over stretched war-fighting forces for their primary purpose; the Defence of the Realm?

In normal circumstances this blog would not entertain nor advocate the creation a Hi-Lo force structure given the native suspicion of political expediency and Treasury parsimony, but the DfiD budget exists as a constant at a time when the Defence budget is losing critical mass, and crucially this a time when the electorate is aware of the value of Defence and wary of the waste in international aid, so perhaps it is time make the suggestion while passions remain heated rather than wait for apathy to return?

So yes, we would be able field an expeditionary force at will, and provide limited follow-on forces for enduring operations, and we would be able to do it while meeting our commitments to international peacekeeping and stabilisation operations.

To those who would complain that using international aid funds to shore up British military capability is a step ‘backward’ this blog would say the following; British aid is at the gift of the British people, and it is for the British people to decide how it should be administered. The intention would never be to replace in entirety aid-spending with deployable force, the former has its place and the latter is not capable of achieving the whole spectrum of development goals, but £7.8 billion could certainly support both functions in equal measure.

Perhaps Britain’s security would be best served by the creation of a paramilitary peace-keeping force.

4 responses to “Warfighting And Peacekeeping – An idea for Hagues joined-up Foreign Policy.”