The Ipod Nano could be so much more. While it is a lovely personal media player in its own right, Apple has created a family of larger devices which are (becoming) less portable, so wouldn’t it be nice if the Nano could receive push-notifications and provide basic interaction with its larger kin? 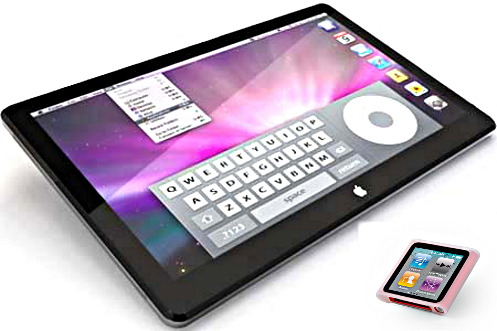 For some reason they haven’t done this so far, but will they in future?

The idea isn’t new, inPulse have been providing their bluetooth smartwatch for the last six months and it has already demonstrated the concept nicely by syncing with Blackberry phones. CallerID’s, text messages, emails, facebook updates, twitter feeds and more, the possibilities are endless with this geek tool, but it could be so much more if a company with a tightly integrated portfolio of mobile devices adopted the idea.

What if that company were apple?

It has already become a fashion to wear ones iPod Nano on ones wrist using various third party straps, but imagine the possibilities if it could sync with your iPhone or iPad……. Your 3G iPad receives a skype message, but its buried in your bag, do you remain oblivious to its arrival, or do you have to check before you know how urgent a response is? If your iPhone has a headset connected when a call comes through would it not be nice to see the CallerID on your wrist and then tap the screen to accept the call, or put it on hold?

The iPod Nano does not list bluetooth among its features, but it does have an FM radio, and its not unknown for comms chips to be capable of both FM and bluetooth regardless of whether all features are enabled.

Apple have all the advantages they need in this field in that they already make all the necessary devices, not least of which is the Nano’s touchscreen, permitting it to not only receive notifications but also to react to them. Receive or reject calls, request the parent device to full-screen the chat/email/text application, “like” the facebook post, or retweet the twitter comment. They all run IOS, but it is not beyond the bounds of reason that similar functionality could be built into macbooks; music streams from itunes and volume controls being just a few ideas that spring to mind.

Even if the current Nano really doesn’t have bluetooth, what is the betting on the next version having exactly that?

Bizarrely, less than 24 hours after I posit this idea for Apple the other vertically integrated mobile device company posts a video demonstrating an early concept to achieve exactly that!

Well what do you know, SE has been doing this for ages with its Android Liveview. What should worry Fossil is that the Liveview is not only very good, at £40 it is also very cheap.