When we look at the yawning disparity between budget and capability of the UK and US Armed Forces it is often easy to forget that the latter faces near identical pressures to the former, with only scale acting as a significant difference. The doctrine of the Blair years SDR98 was to act as a mini-US, with the intention of matching 15% of US commitment in order to earn Framework Nation Status with the command input that entails. Continuing with the goal of Framework Nation Status was an option for the 2010 SDSR, it would however have demanded a disproportionate share of UK defence spending in order to sustain long-endurance counter-insurgency wars.

This was not the direction chosen in October 2010, and similar constraints are forcing the US down this path too.

If we take Iraq as ‘typical’ example of a US style intervention then they have an average commitment of 140,000 troops through the main sequence of campaign, a period spanning six years. For Britain to justify the command input that comes with the 2IC slot, where we influence operations to reflect our priorities, we would have to sustain 21,000 troops in theatre. In reality this means three combat brigades and an additional brigades worth of supporting HQ, logistics and specialists elements. This is of course a generous calculation because if we wish to vie for Framework Nation Status as the strategic purpose of our expeditionary capability then we have to match our resources to the sum of US commitments. As can be seen in the table below that US commitment includes another 30,000 troops in a separate theatre of war, which means Britain needs to pony up another light-brigade at the very least. And yes, we really would have to consider this additional commitment, command input results from trust earned over time, not merely from meeting some arbitrary figure on only the missions we liked in the pic-n-mix bin. 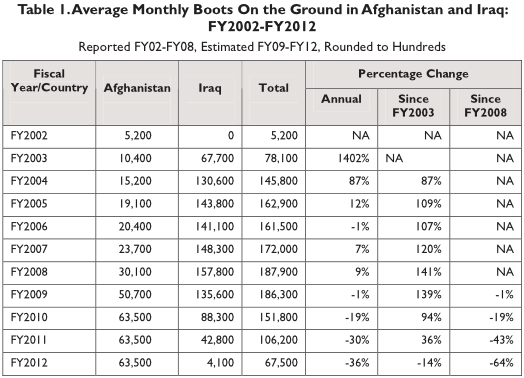 This blog hopes we are all beginning to appreciate the scale of the problem facing HMG under the status-quo. Even the Global Guardian doctrine, whereby Britain seeks to maintain Framework Nation status could not have envisaged an Armed Forces that included more than ten combat brigades, so our maximum sustained commitment would be no more than two brigades and supporting HQ, logistics and specialists elements, about 13,000 troops in total. Not only is this wholly insufficient for the main engagement we seek to influence, it is only half the total commitment required to demand the command-input we seek as recompense. Worse still, a commitment to a continental strategy such as Global Guardian of necessity requires the loss of naval-expeditionary capability that would offer an alternative to enduring US coalition operations.

In short, we would suborn our entire military capability to US ends, and still be unable to justify the 2IC slot that would permit HMG to achieve its own objectives.

However, there is a serious problem to hurdle when we talk of pursuing something other than the status-quo; what do you put in its place and why? The most commonly considered alternative is Strategic Raiding which emphasises independent theatre-entry rather than coalitions with  host-nation assistance, rapid mobility rather than decisive power, and swift action rather than persistent effect.

Does the concept have any validity? It is all very well envisioning Her Majesty’s Forces as modern day buccaneers kicking in doors, but does the notion of Wolfe’s strategic raiding at Battle of Louisbourg hold any sway in the 21st century?

Nathan Freier of the US Army’s Peacekeeping and Stability Operations Institute, and Senior Fellow in the New Defense Approaches Program, certainly seems to think so:

Small Wars 2.0: A Working Paper on Land Force Planning After Iraq and Afghanistan

A selection of quotes as follows –

There is clearly emerging cognitive dissonance between what we now know to be the requisite (and enormous) investment in blood and treasure needed to put a modest-sized state of 25-30 million people tenuously back on its feet and what the risk and cost tolerance of American officials are as a result. Repeating commitments that match Iraq and Afghanistan in scale and duration hazard prohibitive costs for a war-weary nation. Further still, they promise to fix finite U.S. land forces strategically in a single theater, severely limiting broader global freedom of action.

Worst-case circumstances for U.S. forces will be those in which they conduct a unilateral, forced entry into theater; establish multiple lodgments; expand them; and then operate effectively without the benefit of either a host nation partner or a single coherent opponent following a rational strategic design. If as so often is suggested, the greatest threat to the United States is not strong functioning states but rather weak and/or failing ones, then it is reasonable to conclude that the most difficult contingency prospect for U.S. planners is ‘cold start’ intervention into a once functioning, relatively sophisticated state now suddenly crippled by internal conflict or catastrophe.

Ideally, at max commitment, the joint Army-Marine Corps team should have the capacity to undertake two major land operations simultaneously – one of the two a large-scale limited opposed stabilization and the other a smaller rapid entry/punitive campaign. Both missions are founded on a renewed ability to force entry into theater at multiple points with robust force packages that can quickly create conditions suitable for the rapid build-up and distributed employment of additional follow-on forces.

The limited stabilization mission anticipates opposed, minimum essential pacification of a state, territory, or region — friendly or hostile — where central authority has failed and disorder itself threatens core U.S. Interests. Likeliest use of the limited stabilization option is in the establishment of functional security in the most important areas of a crippled state or region. By definition then, limited stabilization is not optimized for bottom-up, long-duration nation-building but instead focuses on establishing and maintaining those minimum essential security conditions necessary for the local reconstitution of effective political authority.

• Neutralize violent threats to friendly governments or unimpeded use of the global commons;

• Establish short-term control over un-, under-, or irresponsibly-governed territory;

• Destroy or dismantle criminal or terrorist sanctuary and support networks;

• Underwrite the extraterritorial exercise of U.S. law; or

• Seize and exercise temporary control over WMD, critical foreign infrastructure and resources, or foreign territory that may be essential to local restoration of order, authority, and the protection of wider international security.

HEAT challenges will increasingly become the objects of dissuasion, deterrence, and, at their most intense level, coercive campaigns — certainly not regime change. Whereas, small wars of disorder need to increasingly be seen as management challenges where intervention seeks to drive active threats to levels senior decision makers find manageable. To the inevitable retort that failure to go ‘all in’ in any small war only guarantees U.S. forces will have to return, the best answer is “perhaps”; as the absolute cost of one, two, or more future wars like Iraq and Afghanistan become increasingly unthinkable.

In short, limited ambitions and targeted goals will see the US realise better (if not best) outcomes while preventing the total-commitment that absorbs US capacity to intervene elsewhere when need arises.

This is no different in concept from the SDSR’s conclusion that five multirole brigades can provide brigade level persistence for limited stabilisation, whilst the two specialist high readiness brigades – 16AAB and 3Cdo Brigades (in addition to theatre-entry assets like carriers amphibs and RFA) provide narrow-spectrum punitive capability when required.

Even if we factor in the reduction of US ambition implied in this document, perhaps by a third, we are still left with a likely scenario of 100,000 US boots on the ground in a single theatre, which to apply the 15% rule would still leave Britain unable to justify Framework Nation Status, and, utterly without any ‘slack’ capability to intervene elsewhere. Not an appealing prospect for Hague’s enlightened national interest.

Does the rationale above really translate to Britain with its limited resource and more modest ambitions? Compare and contrast the words of General Houghton in Washington last year where he explained the ambitions of the SDSR to our closest allies, with those of Nathan Freier in Small Wars 2.0:

Freier – I argue here that any assessment of future small wars requirements that ignores the likelihood of significant policy-level constraints emerging from Iraq and Afghanistan will not end with the right force structure or employment concepts. National leaders will hesitate when faced with future interventions that look – in cost and scale – like the wars in Iraq and Afghanistan. Thus, they are likely to drive down expectations about outcomes and, as a consequence, limit investment of blood, treasure, and time.

Houghton – But third – and I would doubt that this is a particularly British condition – the experiences of Iraq and Afghanistan have bequeathed an immediate legacy of political caution and societal nervousness over the purposes to which the military instrument of National Power has been most recently been put. The scrutiny which attends the commitment to lethal force will be very rigorous indeed. And appropriately so.

In short, considering only the military element of the equation is a complete waste of time and resources, for expeditionary military capability is worthless without public acquiescence to its active employment.

Freier – In essence, it focuses on consequential threats of disorder that cannot be managed or contained adequately with-out timely employment of the right expeditionary land forces. Most defense experts accept small wars as the likeliest raison d’etre of the Army and Marine Corps going forward.

Houghton – Our analysis of future threats matches closely that of the US – no doubt a reflection of our shared perspectives and priorities. We have worked closely with the DoD during its drafting. There have even been Department of Defense officials working within our Strategy Unit – just as we have in theirs.

In short, wide-scale counter-insurgency combined with nation-building is not the guiding light for future conflict planning in Britain and the US.

To conclude with the words of General Houghton on the limitations of this SDSR as a rationale for further change:

Strategy is about sustaining the coherence of policy ambition, resources and capabilities. And we will not have got the 2020 force structure absolutely right. By 2015 the world will look different; Afghanistan may be resolved: the fiscal position, we hope, will be better. And in 2015 we will conduct another SDSR and a further recalibration of strategy will take place

Of the seven scenarios General Houghton tested the SDSR against one would match up against Global Guardian (2nd), and one against Contributory (3rd), while three were either explicitly Strategic Raiding or depend upon it (1st, 4th and 7th), so the direction of travel would appear clear.

35 responses to “The US Discovers Strategic Raiding – Plays catchup with Britain.”