This post is the latest exploration of how one might structure an army for a future guided by the RUSI doctrines; Strategic Raiding, Global Guardian and Contributory, as compared to both the RUSI balanced force from FDR7 and the Future Force 2020 from the SDSR. The analysis is based around what RUSI perceived to be a balanced force structure in the event of a 12-15% cut in Defence spending, which they didn’t advocate per-se, merely putting it out there as a useful indicator of trend reductions. The purpose of the exercise is to show the trend of reductions, using the RUSI balanced force as a baseline that allows us to juggle the numbers further in creating a more asymmetric force structure as they recommend. 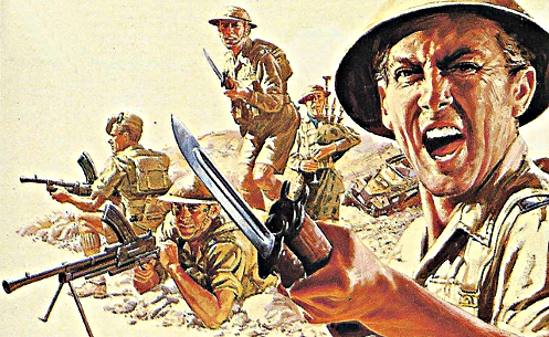 So what do we end up with?

It has been said in various circles that the RUSI doctrines are unworkable solutions based off bankrupt ideas, notably that Global Guardian is predicated on nation-building of a type that the British public has lost patience with, and Strategic Raiding relying on the fantasy of “Go first, go fast, go home”. This blog believes that the error leading to these conclusions are that they are seen as absolutes; the notion that the Royal Navy should reduce to a coast-guard or likewise that the Army should reduce to a glorified US Marine Corps, when in fact they are nothing more than preferences that add emphasis to one area of the force structure or another.

What follows is this authors inexpert suggestion of a land force structure for each:

This structure would see land forces similar to Contributory above, but keeping two brigades for intervention, with a more capable naval structure and a less C4/ISTAR dominated air force.

The goal to generate and sustain a 2Star command in the field formed around two brigades, and to keep available a battle-group force for limited interventions. This structure would use the 3:1 ratio based on nine month tours.

The goal to generate and sustain a brigade in the field formed around a single Multirole Brigade, but to keep three light brigades ready for Limited/Punitive Interventions at a medium scale. This structure would use the 3:1 ratio based on nine month tours, but would not anticipate the light brigades being in constant rotation. The ninth armoured battalion would be a Form Rec unit composed of three sabre squadrons of light armour, to equip the commando brigades as required.

The goal to generate and sustain a brigade, along with theatre level C4 and ISTAR assets, in the field as the core of a larger multinational command, and to keep available a Commando force for limited interventions at battle-group level. This structure would use the 4:1 ratio based on six month tours.

The goal to generate and sustain a brigade in the field formed around a single Multirole Brigade, and to keep available a Commando force for limited interventions at battle-group level. This structure would use the 4:1 ratio based on six month tours. There exists the possibility, as evidenced by the survival of both 3Cdo and 16AAB, that the ambition may return to Limited/Punitive Interventions at the brigade level, but this would not be expected before 2020 as a result of Afghanistan (and Iraq).

So, were these units and formations just pulled out of a hat? Yes, but they are broadly compatible with the cost assumption of RUSI’s FDR7 paper linked above. It is worth noting, that just as Defence Select Committees have felt free to use the term FF2024 to indicate capabilities that will take longer to arrive, so have I: 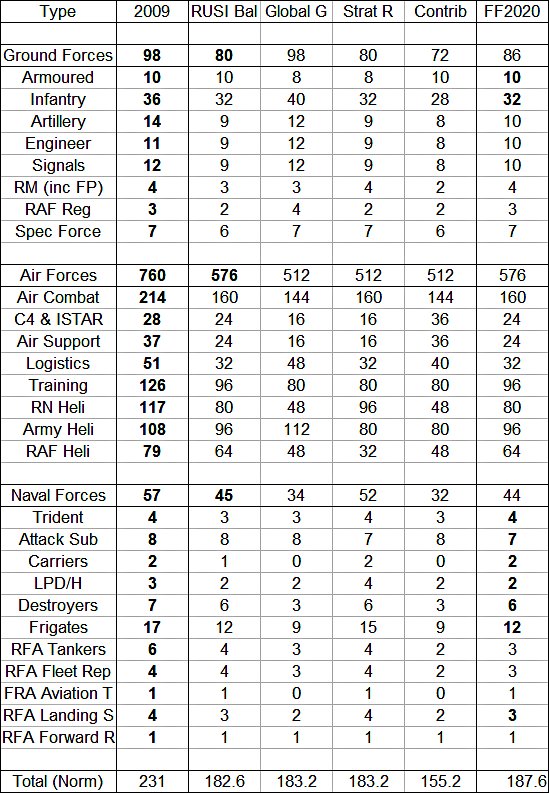 If the total figures at the bottom are any kind of useful indicator then this blog’s suggestion for a Strategic Raiding and Global Guardian force structure will cost only fractionally more than their Balanced Force scenario. This is not unaffordable given that the actual cut in Defence spending was limited to 7.5% rather than RUSI’s best guess of 12%-15%, and both are predicated on the real-terms increases from 2015 that have now been agreed with the Treasury. The Contributory doctrine is of course significantly cheaper, as it should be since it eschews sovereign and strategic power projection along with the Great Power ambitions that require it.

What do these cost projections tells us about the validity of the SDSR’s Future Force 2020? The SDSR is frequently derided as a cost-driven exercise, with few pretensions to strategy as a guiding light in the reform process, and there is some validity to the accusation. The FF2020 structure does bear the hallmark of the salami-slicing Defence Review that many feared, failing to lean decisively in one direction or another and costing more as a result. However, it is not a great deal more costly so what matters here is capability retained.

Perhaps the words of General Houghton to the Defence Select Committee go some way towards explaining the lack of an explicit land/maritime focus:

Nick Harvey: I would not want to add to what I have already said. I believe it will have a wide spectrum of capability. The Vice Chief may want to say more.

General Houghton: If it is positive, made affordable and delivered, you can have a dance about full spectrum. I read what Sir Rupert Smith said, and spectrum is, in many respects, relative to one’s enemy, not to the universe. You have to constrain your boundaries.

It meets the National Security Council’s adaptive posture in its considerations of the time. So it still has the ability to project power in all three environments at a strategic distance, and the ability to commit to a sustained operation on the land in the messy environment as depicted in our “Future Character of Conflict”. In that respect, it would be full spectrum within sensible bounds; it must be bounded in the reality of national ambition.

The answer to that is that FF2020 does bear a remarkable resemblance to what this blog considers Strategic Raiding, and where it fails is in the reduced ambitions of the Limited/Punitive Intervention forces. All is not lost however as this is only a reduced ambition; both 3Cdo and 16AAB are retained and could, post Afghanistan, receive the supporting forces they need to deploy at brigade level. This perception is enhanced by the recommendations of the Reserves Review, reinforcing them as you would expect at a time when the Regular Forces are being reduced.

To finish with the words of Prof Lindley-French to the Defence Select committee:

“There is a very great danger that by default, if we hold our nerve, we could end up with quite a sound defence strategy. There will be two carriers, strategic mobility, Astutes-not enough, but in time you could build more over 20, 30 or 40 years-Type 45s and Type 26s. It is a concept whereby there is projectability, not globally but regionally-plus. We could actually have a defence strategy worth talking about, by muddling through and from the bottom up, which has nothing to do with the NSS or the SDSR. The issue is, can we hold our nerve over that longer investment period?”

So, does it make sense, and how would you see the doctrines being structured?

[note -should be the final version, spreadsheet available here]

Can I commend this to everyone interested, there is a fantastic amount of detail here, particularly in the linked explanatory document. I merely went with the RUSI figures, but Gabby obviously understands them and can provide a coherent explanation for why a particular configuration is desirable, who will likely fill the role, and how they will be equipped. Agree or disagree, this forms the foundation of an informed debate and i think this information will be helpful, not least because this is written with the latest reductions and reserves changes in mind.

Thank you Gabby, this is exactly the kind of response I was hoping for. 🙂

The explanatory notes are available here.

45 responses to “Future Army Structure – A call for papers Part 3.”