Being a public-spirited sort your blogger chose, in the months leading up to the publishing of the SDSR, to take part in the public consultation process that preceded its public release. I have no idea now what I said but it no doubt involved a lot of wittering about sovereign and strategic power-projection, and how this aim was best achieved in the coming years of austerity by a greater emphasis on naval and expeditionary forces. The reply arrived last month. 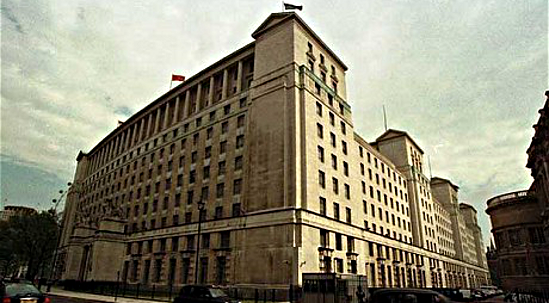 What are the Armed Forces for, and how is the SDSR supposed to help them achieve this end?

My thanks to the Assistant Head, Strategic Defence and Security Review Secretariat, for taking the time to shed some light on the matter:

Thank you for your email dated 10th October 2010 to the Secretary of State for Defence on the Strategic Defence and Security Review (SDSR). Your letter has been passed on to me for a reply. I am very sorry we have taken so horribly long to reply. We try to reply to all the letters we receive, but I am afraid that we have had so many on the SDSR and on Defence Reform that this has taken much longer than we would like.

The Government’s National Security Strategy (NSS) defines Britain’s place in the world, and it identifies two core objectives as: ensuring a secure and Resilient United Kingdom; and shaping a stable world. It is in the national interest to continue to be actively engaged in world affairs. This requires the UK to stand up for the values our country believes in – the rule of law, democracy, free speech, tolerance and human rights. To be able to do this we must maintain strategic influence and have the ability to project power as well as using our unique network of alliances and relationships – with the United States of America and as a member of NATO and the European UNion as well as a permanent member of the Security Council. The NSS for the first priorities the risks the country faces and the tasks we must undertake to tackle them. With the SDSR it presents for the first time a whole of Government approach to the full range of the UK’s security challenges that ensures the UK will maintain the capability to act well beyond our shores and work with our allies to have a strategic presence wherever we need it.

The Government could not ignore the present financial situation or the MOD’s budget deficit. A strong economy is a national security requirement and an affordable Defence programme is the only responsible way to support the Armed Forces in the long term. Deficit reduction is therefore an overriding strategic priority for the Government and Defence has its part to play in bringing the budget back into balance over the next few years. That said, the Government quite deliberately cut the Defence budget less than spending as a whole because it is fundamental to the UK’s national security. Despite these cuts we expect the UK to remain the fourth largest military budget in the world and to meet NATO’s target of spending 2% of gross domestic product on Defence. The resources allocated for the next four years will enable us to pursue today’s operations and prepare for those of tomorrow. As events in Libya show, the agile and flexible forces the SDSR concluded the UK needs make a profound difference on the world stage.

The Government has two main priorities in the SDSR: to protect the UK mission in Afghanistan and ensure that we emerge with a coherent Defence capability in 2020. It had to make tough decisions to scale back the overall size of the Armed Forces and reduce some capabilities less critical to today’s requirements. Ministers have made clear that had the Government has a clean sheet of paper, without the fiscal deficit, unrestrained by existing contractual obligations and in a different operational circumstances, the result would undoubtedly have been different.

Nevertheless, although difficult, the decisions it made are coherent and consistent, and will provide the UK with the capabilities that we requires for the future that will allow us to project power and influence in a rapidly changing world. The Government is, therefore, pressing ahead with procuring those key capabilities. These include the two new Queen Elizabeth class aircraft carriers, seven Astute class nuclear hunter-killer submarines, a fast jet fleet of Typhoon and Joint Strike Fighters (JSF) and modern strategic and tactical lift aircraft. The government is also investing in activities, such as conflict prevention and aid, that prevent the development of threats ‘upstream’, before they require a more demanding military response.

Although the future Armed Forces will be smaller than now, the UK will remain one of the very few countries that can deploy and sustain a brigade sized force with its air and maritime enablers, capable of intervention and stabilisation operations almost anywhere in the world.

The SDSR also concluded that we will make substantial reductions in our civilian workforce. MOD civil servants play a critical role in Defence. They support Ministers in determining policy and strategy; managing the resources allocated by Parliament; and maintaining key international relationships. They also perform a range of vital front line roles, from manning the Royal Fleet Auxiliary and providing fire safety, to scientific knowledge, contracts expertise, logistics support, intelligence capabilities and policy advice. However, as we move to a new force structure, restructure defence capabilties and rationaise the estate, we will need fewer civilian personnel. In the SDSR and since the Government is therefore planning reductions of some 25,000 civilian staff by 2015 and a further 7,000 by 2020, against a baseline of 85,000 before the SDSR. As of 1st July 2011 numbers against this baseline had already fallen to some 78,300.

The Government accepts there are some risks associated with transition to a new force structure and reacting to unexpected events. It is managing this by maintaining the UK’s strategic intelligence capability, ensuring we have adaptable capabilities, deepening partnerships with international allies, and preserving the ability to reconstitute military capability. Overall, the SDSR is a point of departure, not the end of the line. The Goverment has set a path to 2020 and beyond, with regular reviews every five years. Up to 2015 is a period of rebalancing the UK’s strategic direction. From 2015 to 2020 will be about re-growing capability and achieving the Governments overall vision.

I hope this is helpful

It has been, my sincere thanks for taking the time to write such a detailed response.

We face no existential threats, but others do, so there will always be a requirement for someone to arbitrate disputes from the end of a gun barrel (lets call this the UNSC for now). Given that we face no existential threats, and that we have a population that is (still) accepting of elective warfare, it is at least appropriate that Britain should consider itself for the role of gun-barrel arbiter.

However, an appropriate ambition is not the same the as a realisable one, but on the other hand we will remain a top-ten economy beyond 2050 and likely a top-five military spender in the same timeframe, so perhaps it is a realisable ambition too.

As for what Britain gets out of its determination to play world-cop; arguably not enough if we are purely looking at this through the lense of national (self) interest. However, there is nothing immoral in this ambition as we have an interest in promoting an international rules based system where laws and norms are adhered to. Responsibility to Protect, a ‘norm’ now quite accepted in International Relations is a case in point (read: Libya). Britain’s position on the Security Council is in part justified by the strategic bargain with friends and allies that we will work to achieve collective security in the widest sense. We can choose not to meet the requirements of that strategic bargain, but then we really ought consider giving up our SC seat, and live with the fact that our successor will be acting to further their interest rather than ours.

Libya was a success and thus gives legitimacy to R2P as a template for the future interventions, which is exactly what France and Britain want. All they have to offer the UNSC in the 21st century is their high-tech ability to project power as the worlds policemen. France and Britain in the 21st century lack the prestige, industry, geography, population, or wealth that might otherwise justify their seats, they need R2P, and they needed Libya to be a successful piece of legal precedent.

Will the British public support such ambitions as blithely stated above?

According to a recent survey commissioned for Chatham House on public attitudes to British Foreign Policy this is just fine:

Which of the following statements comes closest to your view?

There you have it, but this also illustrates the danger.

Anyone who wants to find out exactly how small the British Army can get, and the other services to a lesser extent, has only to keep on cheering as the Army is committed to one protracted and nasty COIN war after another………….. until the day when this statistic is reversed:

On that day the electorate will have stated it is no longer willing to see the country as a Great Power willing to project power for the greater ‘good’*. Then you will see the Defence budget decimated!

Meeting the NATO commitment will at that point become optional, reconfiguring the entire army to sustain power-projection will become antithetical to a cost-effective self-defence force, assets that allow HMF to dominate a theatre of war will be an irrelevance. The Army will rapidly become a light-duty peacekeeping force of 60,000 blue-helmets.

4 responses to “Letter From The MOD – What are the Forces for, and how does the SDSR help achieve this?”