France and Britain have concluded a set of new Defence agreements that will see the countries work more closely together, but what will be the result? The countries share a great number of complimentary & similar characteristics including GDP, Defence budgets, UNSC membership, nuclear deterrents, overseas dependencies & global foreign policy ambitions, but both have defined their ambitions through opposing reactions to the Suez crisis. In both instances to never find themselves marginalised in world affairs through opposition from the US, but on the one hand by by converging already complimentary ambitions, and on the other by creating a european framework through which independence of the US can be achieved. 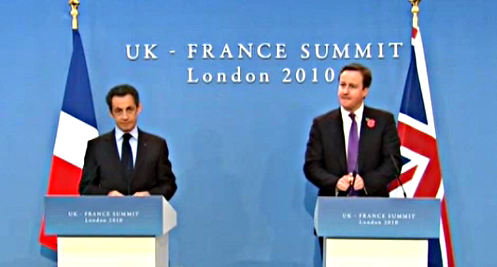 What does this agreement tell us about how those ambitions have evolved since the Cold War?

The first question to ask is whether one party or the other has moved significantly in the direction of the other, the second is whether the detail provides any clues to the future trend of movement along the Gaulist/Atlanticist axis.

The logical focus for the first is the agreed position on NATO and the EU, for Britain has always worked to retain the engagement of the US, through NATO, in its european interests, and the latter has instead worked build a europe that is independent of American hegemony. Both have been edging closer together since the late nineties but significant differences persist.

For its part Britain has worked to fashion a europe that is capable of collective military action at the softer end of the conflict scale, such as peacekeeping, by working with France to create the St Malo accords on defence integration at the inter-governmental level.

France under Sarkozy has welcomed this defence integration, albeit wishing to have this occur at a supra-national EU level, but has demonstrated a commitment to the NATO collective defence organisation by rejoining it after decades of observer status.

“22. NATO remains the fundamental guarantor of Europe’s security. We share the same objectives for the forthcoming NATO Summit in Lisbon. We also want a new Strategic Concept that: makes clear NATO’s continuing commitment to collective territorial defence and to addressing threats to Allies’ security wherever they stem from; addresses new threats to Allies’ fundamental security interests; and underlines NATO’s desire to work with a wide range of partners.”

The result is unambiguous, european security has a core extra-european component via the capability and will of Canada and the US. In addition the two countries seek a new strategic concept that works to resolve threats to north american security as well as european, including threats to their ‘interests’.

“24. We continue to support the objectives and full implementation of decisions taken by the December 2008 European Council, under the French EU Presidency. In particular we encourage all European Union members to develop their military, civilian, and civilian-military capabilities, so that European countries can become more effective at delivering security and responding to crises.”

Here the result is a little more misty, but that December 2008 European Council decision includes agreement that the Treaty of Lisbon will not prejudice the security and defence policy of Member States. Further, that the EDSP will continue to develop in full complementarity with NATO in the agreed framework of the strategic partnership between the EU & NATO, with the goals of strengthening and optimising ‘european’ capabilities in the years ahead, and emphasising the ‘EU’s’ desire to work for peace and security. A clear demarcation between a europe of nations and the EU.

The result appears to be a bilateral affair characterised by inter-governmental cooperation and integration, so on balance the British government appears to have ‘won’ its preferences………

However, as with all matters european there is the potential for further integration, potentially to the point where force employable is no longer sovereign, which in this instance depends on two factors.

1. that strategic capability is so enmeshed with France that sovereign action is not possible without access to those joint assets.

This is termed a ‘downstream effect’ in Defence circles, but can any evidence of intent for such an effect be determined from the new Defence agreements?

“8. Combined Joint Expeditionary Force. It will involve all three Services: there will be a land component comprised of formations at national brigade level, maritime and air components with their associated Headquarters, and logistics and support functions. It will not involve standing forces but will be available at notice for bilateral, NATO, European Union, United Nations or other operations.”

The key point here is that this expeditionary force, presumably at division level due to the reference to “national brigade level”, will not involve standing forces. Rather, forces will be held available for joint operations so even if there were a supra-national EU command entity it would still require the ‘assent’ of the constituent nations.

“9. Aircraft carriers. This will create opportunities for UK and French aircraft to operate off carriers from both countries. Building primarily on maritime task group co-operation around the French carrier Charles de Gaulle, the UK and France will aim to have, by the early 2020s, the ability to deploy a UK-French integrated carrier strike group incorporating assets owned by both countries.”

This is admittedly worrying, for two nations each sharing a single carrier with integrated task-group elements represents a strategic capability that is no longer sovereign. It is much to be hoped that France makes use of its £100m purchase of the CVF design in order to procure PA2, and that Britain likewise uses the opportunity of a post Afghanistan SDSR in 2015 to bring the second QE class into full service. This would preserve the ability for sovereign action by both France and Britain, and would be in line with a broader european ambition for three to four fleet carriers. The combined task-group would still be an essential capability, providing both parties the guarantee of deploying naval power projection with strategic depth. We shall have to wait a further five years to hear answer to this question however.

This is no doubt why this massively expensive PFI survived the SDSR in October, and probably comes with similar clause providing access to French A400 fleet when it comes into service as well as their maritime patrol aircraft. The retirement of the Hercules and MRA4 fleets would make this arrangement highly beneficial to British Armed Forces, especially if it included access to French intra-theatre aircraft such as the C160 and Cn 235-200. Either way, it does not involve a complete dependence given that the RAF will possess a fleet of C17 strategic airlift and A400 tactical airlift planes.

“12. Submarine technologies and systems. We plan to develop jointly some of the equipment and technologies for the next generation of nuclear submarines. To that end, we will launch a joint study and agree arrangements in 2011.”

The Defence Industrial Strategy under the previous government rightly considered nuclear submarines as a strategic industry to be preserved, and the article above does not alter matters with its sensible discussion of joint equipment and technology programs.

“b) to collaborate in the technology associated with nuclear stockpile stewardship in support of our respective independent nuclear deterrent capabilities, in full compliance with our international obligations, through unprecedented co-operation at a new joint facility at Valduc in France that will model performance of our nuclear warheads and materials to ensure long-term viability, security and safety – this will be supported by a joint Technology Development Centre at Aldermaston in the UK”

The matter of the nuclear deterrent is the most controversial area of cooperation if only because of our technology relationship with the US through shared facilities such as Aldermaston, but rumours in the news suggest this collaboration was agreed with the US beforehand therefore we must assume that sensitive areas will be thoroughly fire-walled on both sides. The lack of protest and outrage from the other side of the Atlantic indicates that the US is satisfied with the security arrangements surrounding sensitive technologies. It has been suggested that ‘downstream’ effects will result in a joint deterrent but given that the French deterrent costs nearly double our own, which is itself heavily subsided by sharing with the US, it is difficult to imagine that any putative French/UK deterrent would prove as effective or as cheap as that which is possessed now. It would in any case only swap one technology dependence for another and thus fail to answer the biggest objection which lies around its independence.

16. Unmanned Air Systems have become essential to our armed forces. We have agreed to work together on the next generation of Medium Altitude Long Endurance Unmanned Air Surveillance Systems.

This is an interesting element, for UAV’s represent the future of the defence-aerospace industry in europe, so we shall have to wait and see whether this is limited to ISTAR platforms, or whether it matures into full cooperation on deep-strike UCAV’s such are as emerging from the Taranis and Talarion demonstrator projects.

Significantly, one area that does not feature at all is intelligence gathering. There is specific mention of cooperation in the areas of satellite communications, cyber-security and counter-terrorism, but nothing on broader intelligence gathering apparatus. Agreement in this area would have signalled a disengagement of Britain from the US for the intelligence sharing agreements  go beyond that shared by any other nations today in the depth and breadth of their integration, thus requiring a level of trust that utterly precludes the involvement of third parties.

To conclude, the agreement reiterates the primacy of intergovernmental treaties as the bedrock of european security, rather than supra-national bodies, and does so whilst preserving the US/UK intelligence relationship, and sovereign military capabilities in all areas with the possible exception of carriers, so with that proviso in mind this author is happy to endorse what is a very sensible and beneficial agreement. The failure to bring the second carrier into service would give lie to the conclusion above, and herald exactly the kind of ‘downstream’ peril that so many suspect.

Finally, it is interesting to speculate that Britain’s supposed lack of grand strategy is nought but a sham. To quote Churchill; “For four hundred years the foreign policy of England has been to oppose the strongest, most aggressive, most dominating Power on the Continent”. If we consider a future federal europe as the dominant power on the continent, whilst agreeing that we are too polite to call it such and thus articulate the ambition, have we not worked to achieve exactly this by picking at the seams of the already frayed Franco-German axis? Why would France accept such a change? Perhaps it to is looking to bolster its leverage in europe, an end primarily achieved through Germany in times past, and now in need of a new fulcrum given Germany’s dalliance with Russia……